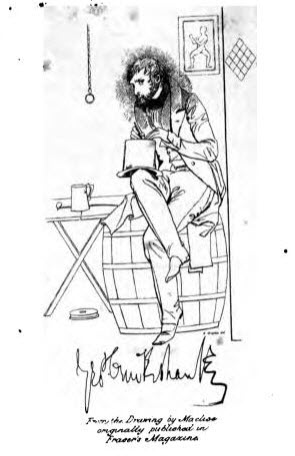 A Self Caricature by George Cruikshank

Cruikshank was called the modern "Hogarth" by his contemporaries. His illustrations for the novels of Charles Dickens and many others, brought him great fame during his lifetime.

George Cruikshank was born on September 27, 1792 in London. His father, Isaac Cruikshank, was one of the greatest cartoonists of the time and Cruikshank began his career as an assistant and apprentice of his father. His older brother, Isaac Robert, also followed in their father's footsteps and eventually became an illustrator and caricaturist. Cruikshank's early work consisted mainly of caricatures, but in 1823 at the age of thirty-one years, he began to specialize in book illustrations.

A Scene from the Book "Life in London"

Illustration from George Cruikshank's Table Book, this one on the subject of mesmerism or hypnotism. 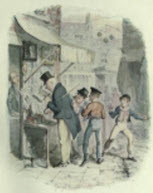 A Scene from Oliver Twist

The first part of the Cruikshanks' career is noted for his caricatures depicting, and placing under a magnifying glass, the characteristics of the English population at the time. He collaborated successfully with William Hone on the political satire "The Political House That Jack Built" (1819). His first important work was Pierce Egan's "Life in London" (1821). This was followed by "The Comic Almanack" (1835-1853) and "Omnibus" (1842). 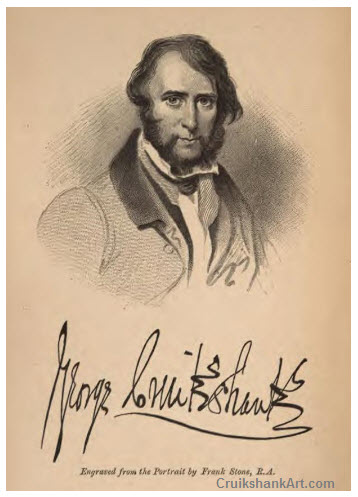 George Cruikshank acquired fame mainly through his savage caricatures of members of the royal family and leading politicians of the time. In 1820 he received from the royal family the sum of 100 pounds not to caricature His Majesty King George IV in any embarrassing situation. His work included a personification of England named John Bull, a character developed over the years, in collaboration with other artists British satirists like James Gillray and Thomas Rowlandson.

Cruikshank replaced James Gillray, his main artistic influence, in the hearts of the public and became the best known satirical illustrator in Great Britain. Cruikshank drew inspiration from a variety of sources of news, events such as the campaigns of the war, the enemies of Britain (he was highly patriotic), the economy, the facts of crime, news and the political intrigues and court.

His hostility toward any enemy of England and his racism show clearly through his illustrations painted for the book by William Maxwell, entitled "History of the Irish Rebellion in 1798" (1845) in which he depicted the Irish rebels as animals without any scruples or intellect. Other works by George Cruikshank with strong racist connotations, are the caricatures of "legalized barbarity" of the Chinese population, a subject that was suggested by a friend, Dr. W. Gourley, a proponent of anti-Chinese beliefs during the Second Opium War (1856-60).

Cruikhank illustrated a number of books by Charles Dickens: "Sketches by Boz" (1836), "The Mudfog Papers" (1837-38) and "The Adventures of Oliver Twist" (1838). Cruikshank even acted in an amateur theatre company directed by Dickens.

On December 30, 1871 George Cruikshank published a letter in The Times in which he claimed ownership of the idea for the novel "Oliver Twist". The letter sparked an uproar over who actually created the work. Cruikshank was not the first illustrator of Dickens to make similar claims. Robert Seymour, who illustrated "The Pickwick Papers"by Dickens, had also claimed that he had suggested the idea for the novel to the author. However, in the preface to the 1867, Dickens repeatedly denied any external inspiration.

The friendship between Cruikshank and Dickens ended when Cruikshank became a fanatical supporter of conservatism, which conflicted with Dickens' moderate political views.

After suffering a paralyzing stroke in his old age, Cruikshank's health and the quality of his work began to wane. He died on 1 February 1878 and was buried in St. Paul's Cathedral. The daily newspaper Punch Magazine, wrote in his obituary: "There will never be a man so pure, simple, fair, yet ruthless in whip and customs of our times. His nature had the innocence of a boy in its transparency."

During his career George Cruikshank created more than 10,000 drawings, including illustrations and caricatures. Collections of his works are on display at the British Museum and the Victoria and Albert Museum.