John Bull is the national personification of the Kingdom of Great Britain, created by John Arbuthnot in 1712 and popularized first by publishers in the United Kingdom, and later overseas by illustrators and writers such as the American Thomas Nast and the Irish writer George Bernard Shaw, author of "John Bull's Other Island". Sometimes John Bull is used to refer to the entire United Kingdom, although the use has not been fully accepted in Scotland or Wales, where it is viewed there as purely English rather than British. Therefore, as an alternative in some cartoons Great Britain is symbolized by Britannia or a lion. In Northern Ireland the figure of John Bull has been embraced by Unionists, and is rejected by most nationalists. 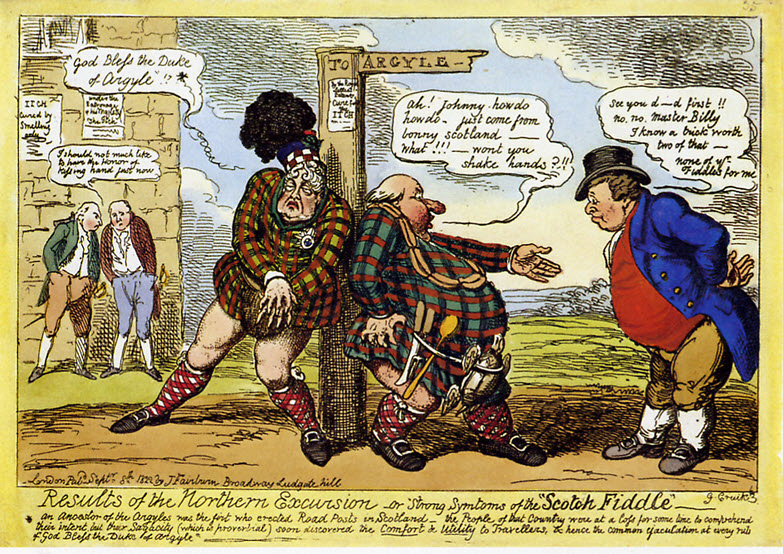 As a literary figure, John Bull is endowed with peasant wisdom and is full of good intentions though these are often frustrated. Unlike the later Uncle Sam, John Bull is not an authority figure, but rather a small landowner who is keen to enjoy his beer and domestic peace; he does not exercise patriarchal power nor heroic charm.

Arbuthnot gave John Bull a sister named Peg (symbolizing Scotland) and a traditional enemy named Louis Baboon (the royal house of Bourbon of France). Peg survived in art beyond the eighteenth century, but the other figures associated with the original picture did not become popular and soon disappeared.

Bull is usually depicted as a stocky and well-built man with coat tails and pants at the knee, with a vest with the flag of the United Kingdom, dressed according to the fashion of the Regency period. He wears a top hat and is often accompanied by a bulldog. John Bull has been used in numerous advertising campaigns over time, and was a frequent presence in the British newspaper cartoons of the late nineteenth and early twentieth century.

From 1790 onward, the stocky, conservative John Bull, dressed like an English country gentleman, was often depicted in drawings by satirists such as James Gillray, Thomas Rowlandson and George Cruikshank, sometimes in explicit contrast to the stereotype of the skeleton-like French revolutionaries, the Jacobin sans-culottes.